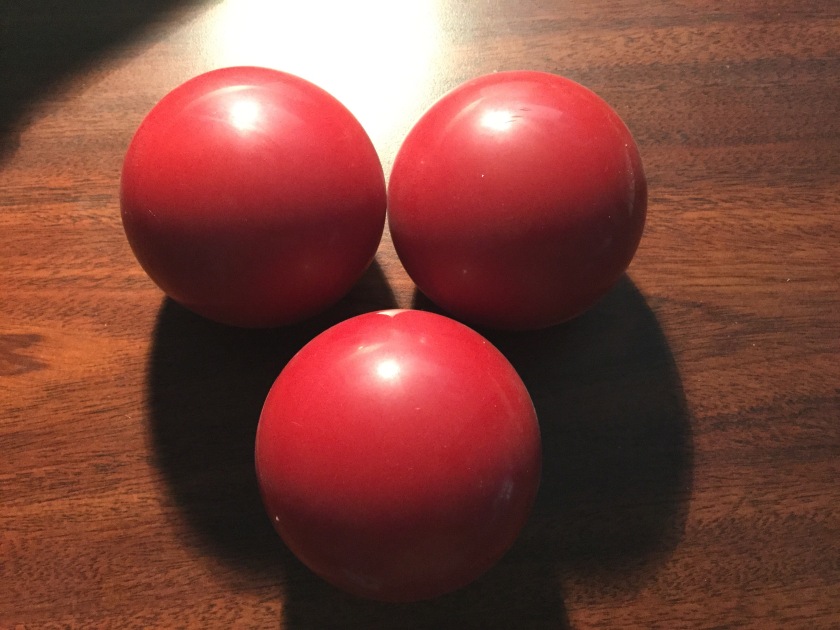 When you work in an office there are certain things you can’t really get away with doing during the work day, even if they’re completely harmless and don’t affect your work.  But since I work at home now with nobody to silently judge me, there are a few little things I do to take advantage of the situation.  Like I can do a quick workout in the morning and then turn around and start working immediately, only taking a break to shower a little later.  Or on that same note I can take a quick break and do some push-ups by my desk at any time.  You get weird looks doing that in a cube farm…and the floors are also generally gross.

But one thing that I’ve started doing recently is getting back into juggling.  I learned to juggle when I was a kid, thanks to the book Juggling For a Complete Klutz, which was a gift from my brother Mark.  I’ve taken it semi-seriously off and on over the years, but haven’t really touched it in a while.  But since there’s nobody around to watch me now, I’ve started juggling while waiting for tests to run or software to compile.  It’s just a couple minutes at a time that would otherwise be wasted, and it’s a great distraction.  And it pairs really well with my standing desk, since I’m already up and ready to move.

I have a few sets of juggling balls, but the ones I’m using now are 1lb each.  They’re called “exer-balls”, and they’re a nice light workout.  Nothing intense, but I can feel it in my shoulders when I’ve been doing it for a while.  Imagine shaking a bottle of salad dressing…not hard, right?  But imagine shaking it constantly for 10 minutes.

I also have a set of 5 balls (regular weight), and I need to find where they are.  I’ve never really been able to get the 5-ball pattern down, but now is as good a time for me to work on it as any.  I just watched a YouTube video on how to juggle 5 (because that’s how I learn to do anything these days), and it has a few steps to work through with 3 balls to prepare for the move to 5.  At the moment I’m working on getting the height of my tosses a little higher to accomodate the extra balls…I can juggle 3 pretty much forever at any reasonable height, but my tosses aren’t quite consistent so I end up reaching just a little too far.  Easy to keep up with when there are just 3, but if I want to do 5 I need to be able to keep my hands closer to the same spot every time.

Oh, and I almost forgot to mention…I’m juggling with 3 1-pound balls while standing in front of my computer.  I have to be consistent, or else one of them is going to smash through my monitor.  Oof.

Written with WordPress for iOS